VinSelf is a known RAT malware already explained on other blogs . It’s a family that has been long used in APT attacks. VinSelf can be recognized in two ways:

The VinSelf obfuscation algorithm is quite simple, but specific enough to state that samples using it are from the same family:

Recently, we came accross an interesting sample that, instead of connecting to a malicious C&C, was grabbing a file (“colors.bmp”) from Google Docs. Due to the presence of the aforementioned algorithm, the sample had been categorized as VinSelf, so such a behavior was unexpected and confusing.

While the image is a valid Bitmap and can actually be displayed, it may be something more than a simple Bitmap.

We have seen pieces of malware appending data at the end of legitimate/innofensive files being retrieved. For example, VinSelf itself sends encrypted data to its C&C prepended by a “GIF89a” header. Foxy also receives encrypted commands from its C&C in what seems a legitimate JPEG image, and Shady RAT is concealing commands in encrypted HTML commentaries, or inside images using real steganography.

Let’s look at the code following the retrieval of this file from Google Docs if there’s something interesting.

The function following the retrieval of the “colors.bmp” file is quite interesting. 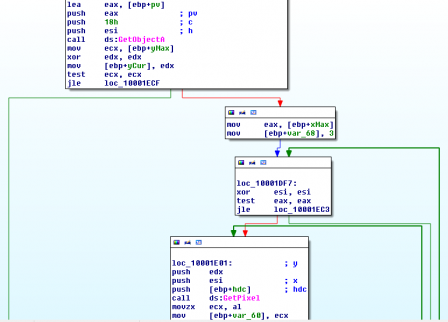 The function is grabbing the LSB (Least Significant Bit) of each color of each pixel, thus generating three bits of data per pixel of the image. Once all those LSBs have been grabbed, each byte of the bitstream is reversed.

Now that we have extracted the hidden data, it must be unciphered: this is done in four steps:

Ultimately we end up with a C&C configuration that looks like:

As a matter of fact, we changed the real content in the source image to not disclose the real C&C.

So instead of having just one layer of obfuscation (the custom VinSelf algorithm), we end up with several layers:

As usual, a script to extract this information from a VinSelf BMP file has been released on our Bitbucket repository.

Steganography is not just for hipsters, it is still being used nowadays.